I saw La La Land at the movies earlier this year, knowing at the time that I had a chance of producing these globes for the Blu-Ray and DVD release here in Australia. The day after seeing the movie, I bought the soundtrack and have had it on rotation ever since – and not long after, I also received confirmation of this fabulous design for Entertainment One in Sydney, Australia. The design features miniature sculptures of Emma and Ryan in their famous pose from the gorgeous duet “A Lovely Night”. The Hollywood Hills and sign are in the background, along with an LA city skyline. Finally, the globe includes iridescent glitter and little silver stars, to represent the Academy Award-winning song “City Of Stars”. Just magical. 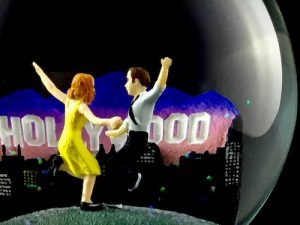