When I started making snow globes, I never dreamed I’d be working for some of my favorite actors and artists of all time. So when I received an email asking about custom snow globes for Steve Martin, it was really one of those defining moments. 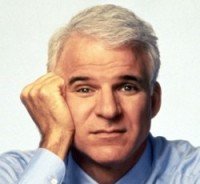 It was around the early 1980’s that I first saw “Steve Martin Live” on video, and became a huge fan. Since then, lines from his movies have become part of my family and friends’ vernacular – it’s not uncommon to hear us quoting classic lines from movies like “The Man With Two Brains”, “The Jerk”, “Dirty Rotten Scoundrels”, “Parenthood” and so many other classic films I’ve watched over and over.

On the day I received the email in question, I called the contact number to discuss the project, and, to my absolute surprise and delight, found myself speaking with the man himself.

Further shock and awe ensued when Steve mentioned the fellow comedians and actors who would be receiving these snow globe gifts – other huge favorites of mine including Tina Fey, Dan Aykroyd, Jack Black, Martin Short and Steve Carrell, amongst a total of 14 legendary people.

Steve wanted to offer the globes as thank you gifts to those close friends and colleagues who presented his 43rd AFI Lifetime Achievement Award, at a gala event in June 2015. The idea was to represent Steve at the AFI’s, with each of those people on stage with him.

Here’s an image of my digital mockup for the group sculpture, including:

In order to fit this many figures inside the 120mm globe (which has a setting area of about 6cm maximum diameter), the team decided it would be best to sculpt this out of one piece of clay.

Each of the faces are little more than a millimeter or two, so the focus was around their outfits, hair color and distinguishing features. I think you’ll agree this work is extraordinary, and I’m very grateful to my talented team for creating this level of detail for Steve.

I’m in NYC but evidently they arrived in good order and my assistant wrote, “…they’re SO CUTE!”…Steve

Steve was an absolute delight to work for. He’s fast to respond (helpful when you’re on a deadline), very easy-going and entirely trusting of both me and the process. I’m a bit sad that the project is completed, as I no longer have an excuse to talk with him!

It has been an absolute honor to make these snow globes for Steve – I’d like to personally congratulate him on this award, and give a heartfelt thanks for the years of laughter he’s given to me and the people I love.